So you've installed LineageOS on your device, and now you're unsure on how to proceed. You think that an AOSP-based build can't track you because there's nothing installed on it - but that's where you're wrong.

This guide focusses on what to do to keep you safe, what to do and what to prevent in order to further securing your Privacy on your smartphone.

Some steps in this guide require having a Rooted Phone, which means that the sudo and su binaries need to be available in order to execute commands with higher privileges (as the root user) on the system.

Android's integrated and non-deactivateable Wi-Fi Connectivity Check sends your current approximate GPS location and your device's MAC address every 10 seconds via the Wi-Fi's connection, so that Google can keep track of where you are and what you do.

The data that is received by those domains contains the current NTP-verifiable timestamp, the system's installed exact Chromium Webview and Android version, the system's IMEIs and hardware MAC addresses, and of course the IP of the Wi-Fi connection itself. This is certainly enough data to make any enduser uniquely identifiable, which very likely is its purpose.

The only way to block them is by editing the system-wide hosts file, which requires a rooted phone. In order to deactivate the tracking mechanism, you'll also need either an adb shell or Termux installed.

Then you can edit the /system/etc/hosts file after remounting the system partition with read and write access, as it's mounted with read access by default.

As the Wi-Fi Connectivity Check is implemented pretty cleverly, it rotates between a lot of google-owned domains once one of them is blocked. Therefore the hosts file has to contain at least the following domains in order to block access to them. Note that this will also block web access to those domains if the Web Browser is not routed through TOR.

Android 10 and later has integrated a so-called Private DNS feature in the Network and Internet Settings. But as some might suspect, it's still sending all DNS requests right to Google depending on which AOSP based Android ROM you're using and what kind of patches were integrated in it.

The best recommendation for blocking and encryption of DNS requests is Rethink DNS which is a DNS, Firewall and VPN App that allows to block network connections. It can also block both on a per-IP basis for all other Apps and on a per-domain basis for DNS lookups. Additionally, it allows to forward its requests to public DNS over TLS resolvers, so that your ISP cannot track your DNS requests. 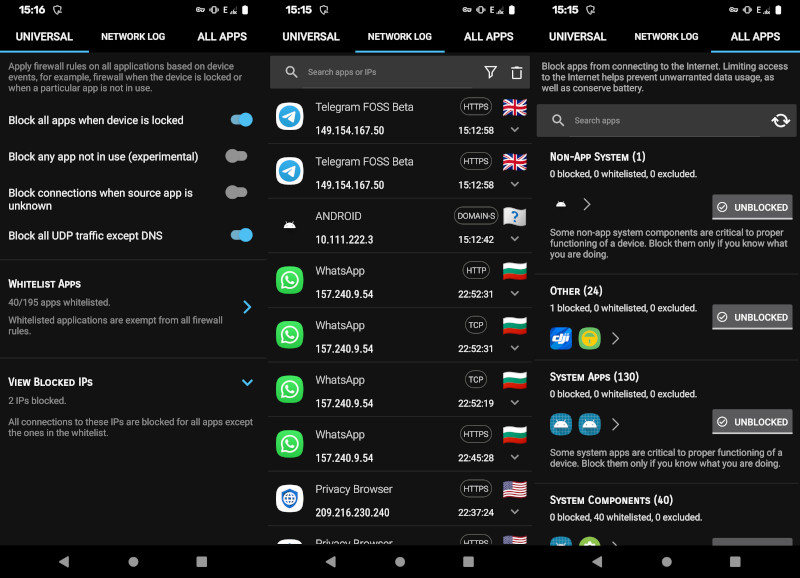 The screenshots show an example configuration of the App, and the Network Log which allows to inspect what an App does on a per-connection basis.

Detection of Trackers and Loggers

App Warden is an open-source tool which integrates the list of known trackers and loggers that is maintained by the Exodus Privacy project.

Additionally, if the device is rooted, App Warden can modify and disable Services and Components of the App. Depending on whether or not the App is really dependent on the Trackers, it might be usable in a tracker-free manner. 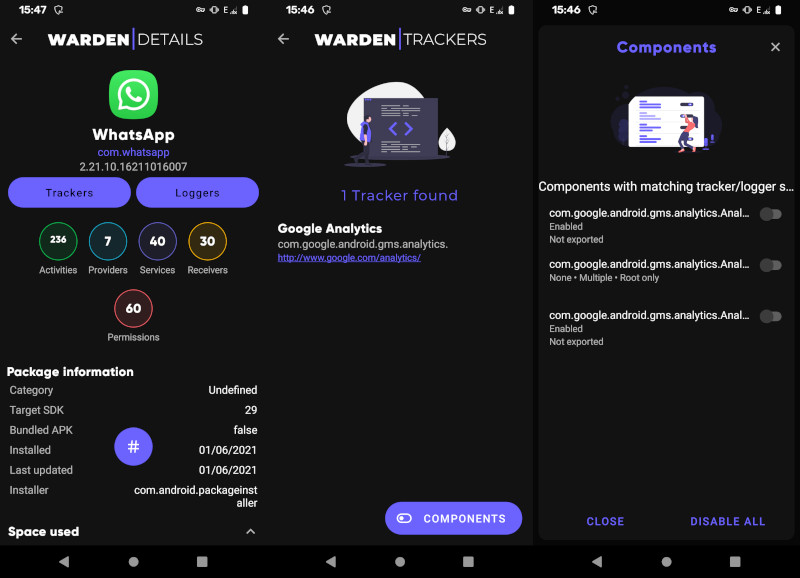 The screenshot shows the Scanner's view of WhatsApp , a privacy-invasive App that uses Google Analytics to track its users - and how App Warden can help disable these malicious App Components.

Permission Manager X is an App that helps to modify App Permissions in a more detailed way. It uses the AppOps API behind the scenes, which allows to override App Permissions and ensure that the App cannot use features of your smartphone, even when the App's Manifest includes those.

Additionally, the App can start an ADB session and a Debug Mode which allows a developer to inspect all tracking features of an App on the fly. 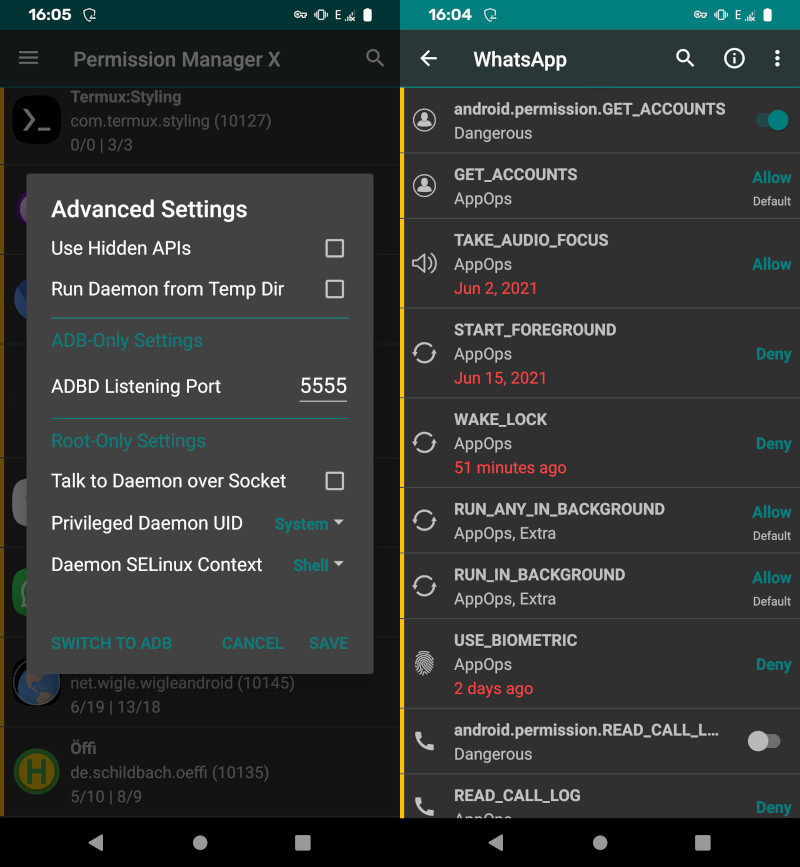 The screenshot shows WhatsApp , a privacy-invasive App that uses a lot of Android's available tracking features to spy on its users - and how Permission Manager X can be used to deny these permissions via the mentioned AppOps and their overridden settings.

Sometimes, Apps can be a little annoying and they constantly start themselves when they're not supposed to. While Permission Manager can help with the prevention of Apps that are starting themselves all the time, it's still sometimes necessary to suspend an App that doesn't want to quit by itself.

If an App resists persistently, you can use SuperFreezZ as an App to automatically or manually freeze all Apps that keep running in the background.

SuperFreezZ is an App that allows freezing a list of Apps easily, including System Apps.

The screenshot shows a list of Pending Freezes, which are configurable on a per-App basis. Pressing the Lightning Button on the bottom right will auto-freeze all Apps that have pending freezes. The App will then go into each Settings App view of the selected Apps and press the Force stop button there in an automated way.

The best navigation App and the by far most integrated one is OSMAnd , which uses the publicly available OpenStreetMaps datasets and map layers.

The App also offers a nice address-based search which allows to quickly lookup an address and figure out what's available in the area. The Point of Interests overlay is compatible to the same ones that are available on OpenStreetMaps, like restaurants, cinemas, or gas stations.

As OSMAnd also offers different modes of transportation where you can set it to either car , bicycle , on foot and via public transportation , it's also amazing when being on a hiking trip that's a little more rural.

The Offline Maps feature allows to download all kinds of regions, from continents to countries to even on a per-city basis, so it's very flexible when you're abroad in only a specific city and don't want to download the whole country's map. 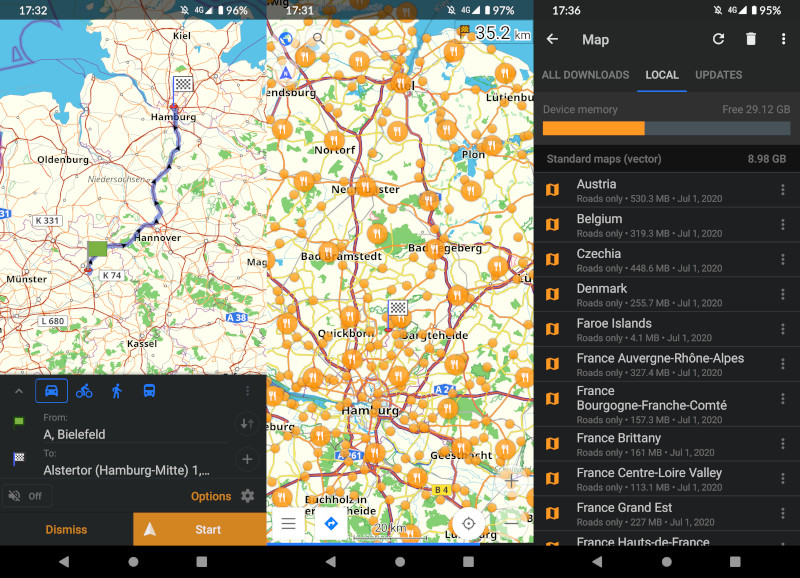 The screenshot shows the a sample route navigation, and the Local Maps feature in the Settings View of the App.

If you want a privacy respecting messenging service, you should use a reasonably trustworthy decentralized end-to-end encrypted messenger. This means that the message has to stay encrypted until the other client decrypts it and has to be encrypted by default (not optionally).

This kind of rules out Signal due to it backing up its decryption keys via Google Play APIs, and it rules out Telegram (even the Telegram FOSS Fork ) because the server implementation is not Open Source and neither verifiable in its behaviour of what happens to the Drafts. As WhatsApp isn't even remotely secure or privacy respecting, we're not going to talk about it.

Luckily, there's Briar as a rising messaging client that is peer-to-peer and is built for total disaster-scenario usage, where Clients can even chat via the same Wi-Fi locally, and even share their messages/forums via Bluetooth.

Web Browser is a harsh topic, as I historically want to like Firefox. But Firefox for Android sends so many packets back to the Mozilla domains that an MITM can easily fingerprint your specific Firefox version that you've got installed. So I cannot recommend it, and my findings were similar to the one of Spyware Watchdog .

I'm currently building up my own Browser Stealth and a WebKit fork called RetroKit due to those exact reasons, so I'm very biased on the topic when it comes to the availability of no other Browser that has a minimal attack surface.

As all Browsers these days are either WebKit, Gecko or Chromium Embedded Framework (CEF) based, there's not much choice to choose from. Even Privacy labelled Browsers like Brave basically aren't doing anything to reduce the Attack Surface, and happily will execute all JavaScript from all untrusted websites by default.

I'm probably going to write a dedicated article about Web Browsers on mobile in the future, and how everybody can write exploits that use techniques like Heap Spraying attacks or stack corruptions in the proprietary and outdated GPU drivers, because WebGL, WebGPU and other APIs weren't designed with having security in mind.